It’s Friday morning. We’re scheduled to spend the day at Grand Cayman, a beautiful little island we’ve been to before, on another cruise. We’ve also missed this port before, on another cruise. The port of Grand Cayman uses teeny tiny little tender boats to shuttle a handful of passengers at a time from the cruise ship to the shore. It doesn’t take much in the way of bad weather to shut down the whole day here.

Which side of the coin are we on this time? Three guesses. The first two don’t count.

Anyway, I’m getting ahead of myself.

I’m awake just before the alarm on my phone goes off. You know, my “phone” that is now just an alarm and a small device for playing spider solitaire. Really, I should be calling it anything but a phone, since that’s now the one function it cannot do.

I get up and head for the shower, and only then do I hear over the loudspeaker that high winds have canceled our entire port day here at Grand Cayman. As an avowed night owl, my first thought is, “I could have slept in.”

My second thought is, “Wait, no sting rays!”

I secretly wonder who Wayne bribed to shut down the port so he wouldn’t have to touch sting rays, or any other living animals, on this cruise. And did the bribe cost more than the puddle-upgrade we paid $600 for?

These are all purely theoretical questions, of course. He’d never admit it. When we had to fix a buried terra-cotta plumbing pipe in the yard in 2006, he surreptitiously bought three ugly gnomes and placed them on the mound of dirt in the front yard. Thirteen years later and he still hasn’t admitted it, even after I found the box hidden in the basement a few months later. 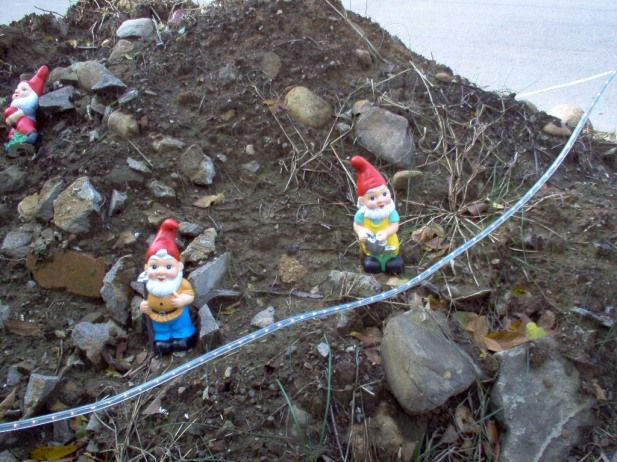 They’re creepier than the average gnome…

Anyway, nobody’s getting off the boat today. Unless they want to swim back to Tampa. Pretty sure none of us do, so we’ll now have two “sea days” in a row. Except for the no-sting-rays thing, I’m okay with this. I love just being on the ship. If they put me on a cruise and just sailed around in a very large circle for a week, I’d be happy as a clam. Well, as long as it’s not too tight a circle. I get motion sickness easily. Plus, I have no idea just how happy a clam really is. Apparently they’re cheerful little chums.

Because we didn’t find out about the cancellation early enough, Wayne and I are showered and ready a full hour sooner than  we’re used to. We head to the Lido deck for breakfast … along with approximately 2,000 other people who are now stuck on the ship and still need to eat breakfast too. Everyone’s still chipper and content, though. Carnival is still feeding us like kings and queens, and none of us have to do the dishes. For me, that’s always vacation enough.

But this will teach me not to book a one-opportunity shore excursion for the last port, especially if it’s one that uses teeny tiny little shuttle boats. Lesson learned.

After another yummy breakfast, I grab ICCC #6 (chocolate-vanilla swirl, as usual) midship on the Lido deck and walk back to the stateroom. I mostly walk in the right direction this time. Because the cruise is almost over. By the time we debark on Sunday morning, I should know exactly how to get to our stateroom.

Another towel animal has appeared. I’ve kept all our animals intact all week, because it just feels wrong to disembowel the towel and then use it to dry off after a shower. “This used to be the beautiful swan towel animal…. Well, at least my butt is dry.”

Besides, they’ve been keeping Boris the squirrel company on the sofa.

I think all the towels are named Terry…

At the end of the week, I plan to blind all the towel animals, and take their plastic googly eyes off and bring them home. There have to be dozens of ways I can use these things once I’m home.

I spend most of the day either meandering around the ship, enjoying the fact that it’s now a few days till Christmas and I’m wearing capris and sandals on deck and sitting barefoot in a deck chair on our balcony, reading to my heart’s content and soaking up the sun while listening to the waves.

A deck chair, a Kindle, and the sound of the sea…

Next installment: Don’t rock the boat… except with Xfinity Mobile.